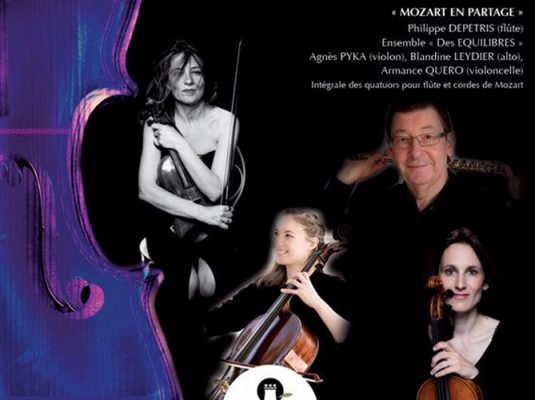 Despite the reluctance to compose for the flute, as confided to his father, Mozart has left us some of the most famous pieces of the repertoire for this instrument : two concertos, another for flute and harp, an opera and four quartets.

It is rare to be able to appreciate the four quartets with flute in the same concert. These quartets still demonstrate the talent of Mozart to balance these compositions, here between the strings and the more solo score of the flute. Their composition spreads over two years (1777-1778) for the first three, with the quartet in A major dating from 1786; Nonetheless, they have a very great diversity of style.

The quartet in C major KV 171 begins the Viennese period of Mozart. The one in A major KV 298 pastiches and reworks popular tunes and other composers. The quartet in D major KV 285 returns to the style of a concerto with the flute as a soloist and the three stringed instruments in orchestral accompaniment. The quartet in G major KV 285a reveals in two movements subtle instrumental colors.