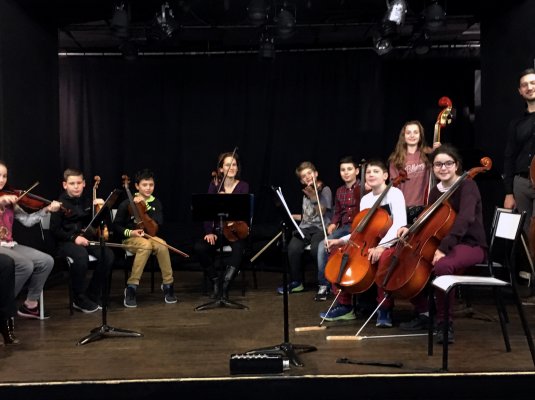 Teaming up with the composer, Des Équilibres musicians take up the ambitious challenge of making middle-school students play
a contemporary piece by Graciane Finzi.

Composed in 1909, these eight short duets by Glière (1875-1956) are very representative of the post-romantic style with a rather
conventional writing, enough to avoid the Soviet censorship suspicions. This language stands out for his unique flair which remained
preserved from the torments and innovations of the 20th century.

A former popular dance of the Renaissance of Italian or Spanish origin, the Passacaglia later became highly prized by the nobility.
This musical form consists of a ground bass with a series of melodic and rhythmic variations over a theme. This musical form is similar
in character to a Chaconne. Haendel composed this passacaglia in the 1720’s and Norwegian composer Johan Halvorsen adapted it for
two string instruments in 1893, originally for violin and viola and then for violin and cello.