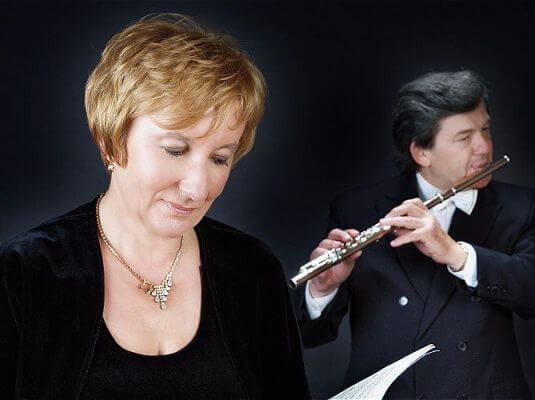 A tribute to Poland

Henryk Blazej, a Polish flautist, graduated from the Krakow Conservatory in 1976. As a student he participated in a National Flute Competition in Poland where his precocious talent distinguished him. He subsequently performed on Polish, European, American and Asian stages, where he met with great success. From 1991 to 1995, he was artistic director of Sandomierz International Music Festival. Since 1994 he has worked with Teresa Kaban as director of the International Festival of Forgotten Music, held in Tarnów,Poland.

Teresa Kaban is a Polish pianist. After graduating from the Krakow Conservatory, she has given concerts in Poland, Europe, the Middle East, the Far East and the United States. Since 1981 she has been regularly invited to play in the most important concert halls of London and other cities in the United Kingdom, both as soloist and within chamber music groups. From 1991 to 1995, she worked with Henryk Blazej as artistic director of the Sandomierz International Music Festival. In 1994 she was appointed Director of the International Festival of Forgotten Music in Tarnów, Poland.